Sunday was the ride to Goathland which was the centre for the filming of TV series “Heartbeat”.

With an early start at 10am from Rising Bridge - a quick motorway dash to Colne, over the twisty moors, onto the great A59. We somehow missed our programmed stop at Thirsk, but found a new stopover further down the road at lovely Helmsley, with a market square full of bikes for morning coffee and cakes. It was onto North Yorkshire National Park to Goathland for a visit and lunch.

We took our Shepherd’s return north anticlockwise round the vast beautiful York moors, and onto a coffee and cake stop at Leyburn – then continued on the twisting country roads through the hills on our way onto Skipton and the A59 home. The weather was forecast was quite correct, with a high of 21degrees, sunny and dry roads.

Another great ManHOC ride out and thanks to all, and Rich for the fab photos. 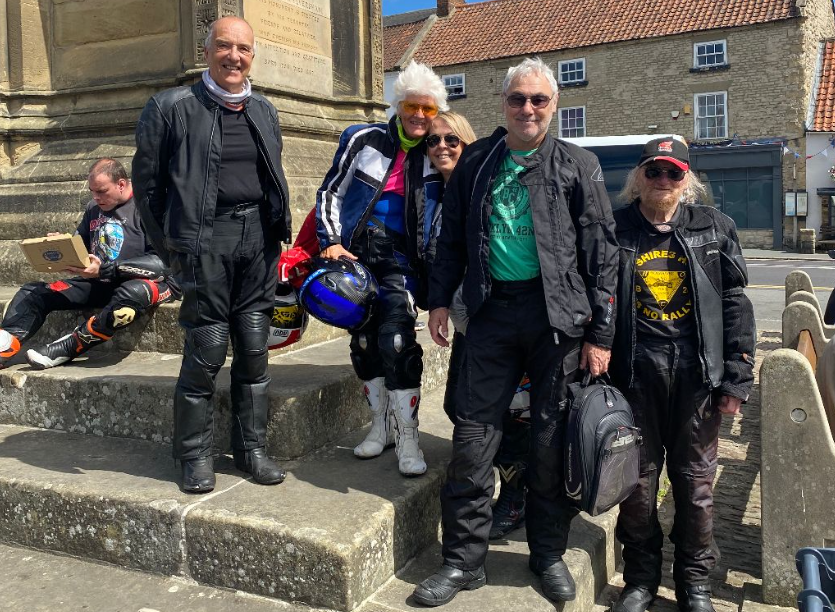 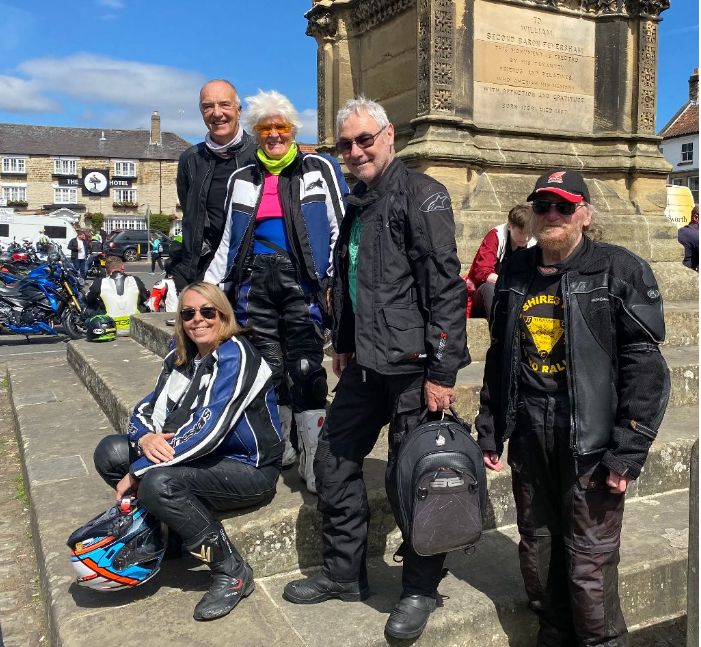 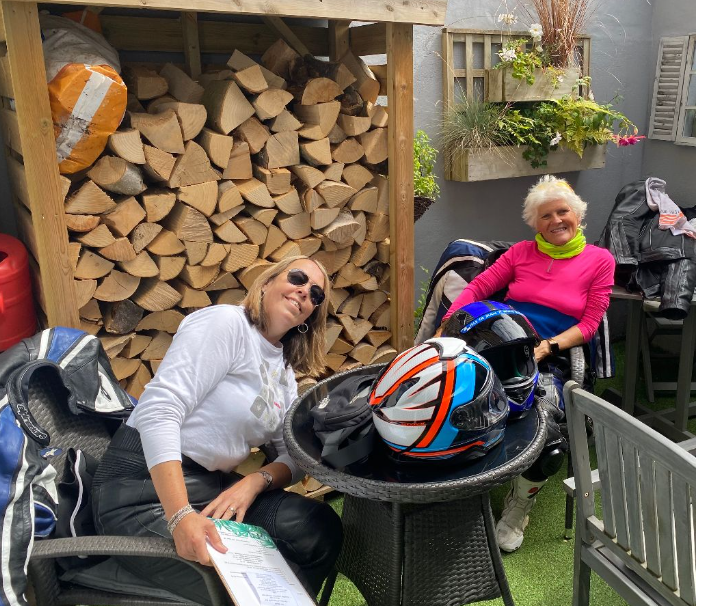 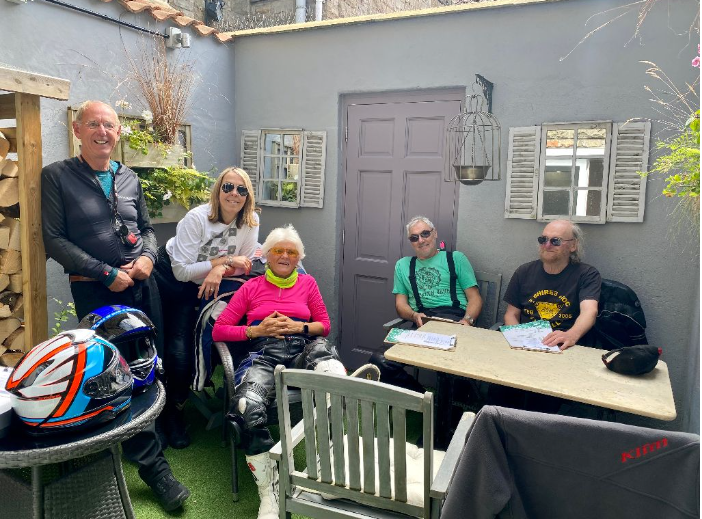 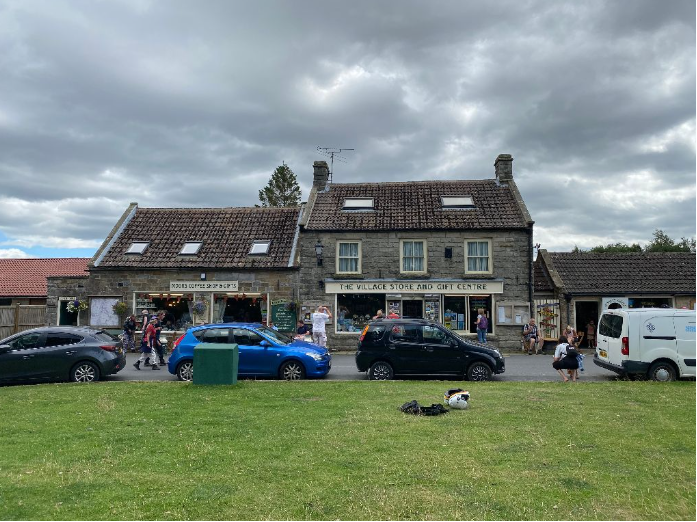 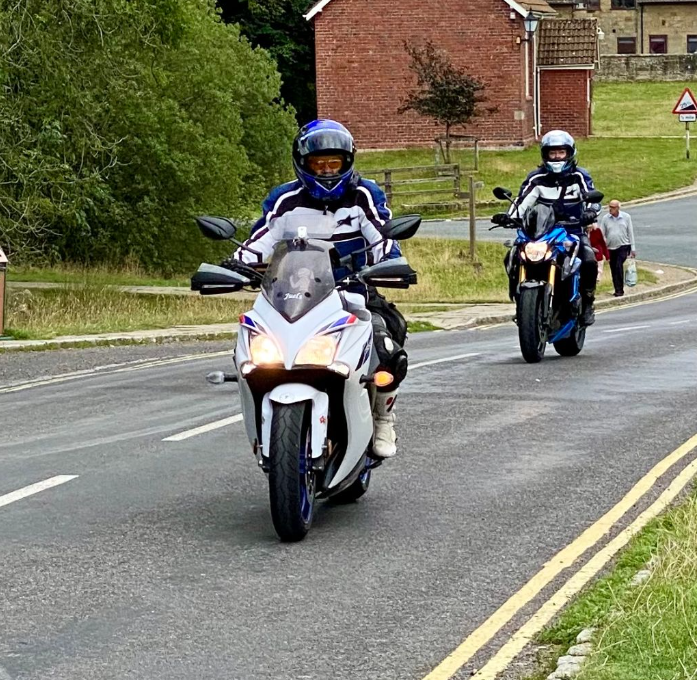 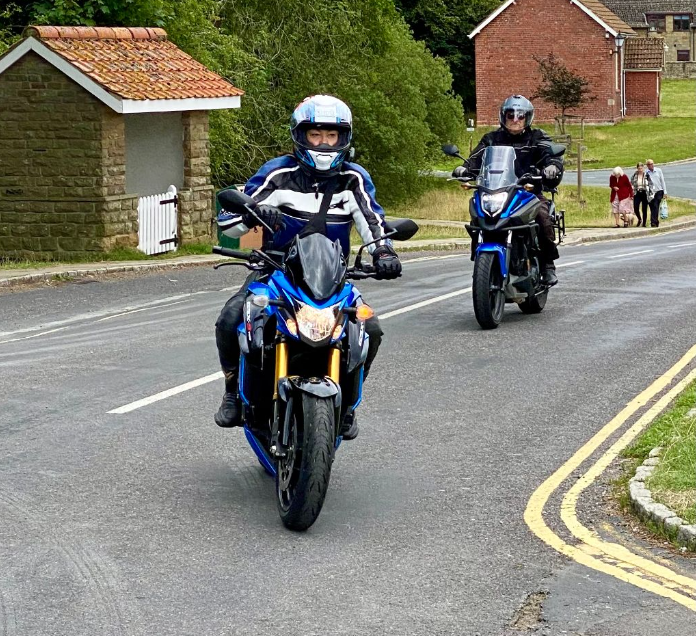 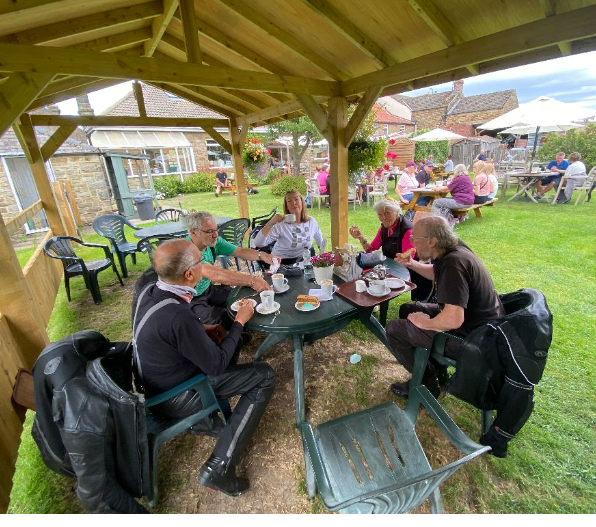 I was very much looking forward to this ride, which did not disappoint, as it was one of the longer rides’ we do this year - 276 miles from Pops and back to Pops - along some great planned roads to and from Jeremy Clarkson’s Farm in the Cotswolds, by our Shepherd.

With an early start at 10am in bright warm sunshine, what I did not expect was, with welcome coffee and cake stops on the way, was a motorway crash in the evening on my way back to Southport on the M62 at junction 6.  This cost me well over an hour, and I arrived home at 10.30pm!!!

The route went down and back on some of the best biking roads, via Shrewsbury and back via Lichfield and Leek and, due to the fab hot dry roads, weather, the planned motorway coming back was a definite - “NO NO”.

His farm was as expected from his web site - full of visitors. There’s a drinks barn with a starting price of £8 for a soft drink and background music! A crowded like small shop selling silly things, T shirts at £35!. Apart from that, there was his “Lamborghini” tractor towing a passenger trailer around his open fields but no Jeremy!! But, we were with the “in crowd”.

Lastly, not to forget a warm greeting was given to Rob and Stacey Station, who we had not seen for some time, who joined us. Thanks to all for another great Manhoc “full” day’s ride.

Cheers malc with pics from Rich and Graham

I left home in Southport at 8.45 am to join the ride gang at Pops and return home at 8.45pm – 12 hours and 241 mls later! The trek, to visit as many bikers’ cafes south, as possible. We managed 7 stops – that’s 7 coffees and 7 pees. Unfortunately, we did not break Phil’s lead, of previous Trek ride outs north, where he managed 10! The weather was nearly as bad as forecasted the previous day, which must have put some people off, as the roads were quiet and dry and with the warm cloudy and sunny day - the temperature topped 20 degrees, and only a 5min rain shower. Gary found some new and exciting roads there and back and found the destination, the famous Crossgates bikers café in south mid Wales.  Thanks Gary, great company and another fab manhoc day out . Cheers - malc

“The Prisoner” – Sunday’s ride met from 10 am for early coffee’s, with an aim to set off at 10.30. The route was as our web site, - down through Wrexham, with a café stop at Rhng estate, just after Corwen, and then over the tops from Bala, and onto to Portmeiron.   The village was fascinating, colourful, interesting and busy, with carnival singing from a folk group on centre stage.  There was also a Porsche car meet with their posh cars littered all over the place. Following an outside lunch, the return was through Bala, with a café stop at Ruthin, for last coffee and cakes. We had actually set off at 11am and it was 8pm when most would have arrived home. With a high of 18 degrees, beautiful sunny weather and glorious scenery and roads, it was actually quite an effort to head for home. - one of the best manhoc rides.

Last of the Summer Wine

From Birch Services, Sunday's ride was over the hills to Elephant and Castle in Holmfirth, where Beverley, the landlady, had our reservation for a visit, parking and pub lunch, The weather was sunny and dry and the ride continued, following a quick visit around the town. along the fab roads in the Peak District  and back to pops for last coffee and cakes, Not forgetting our interim pub stop on the way back before pops! -  no it was not a pub -  but a stopover and a exciting ride on a miniature railway by the Rudyard Lake and further ice creams at its station - lots of fun! 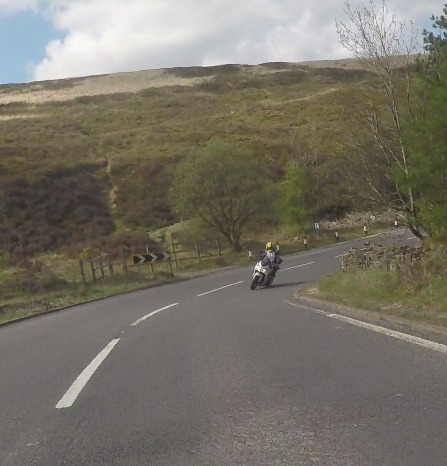 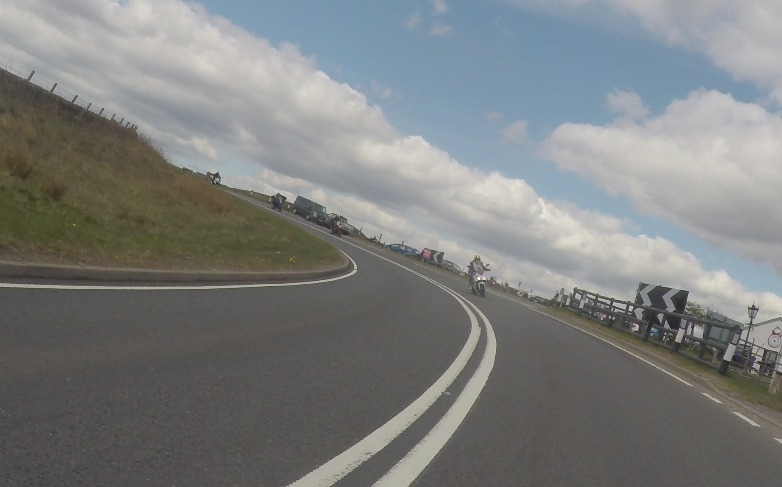 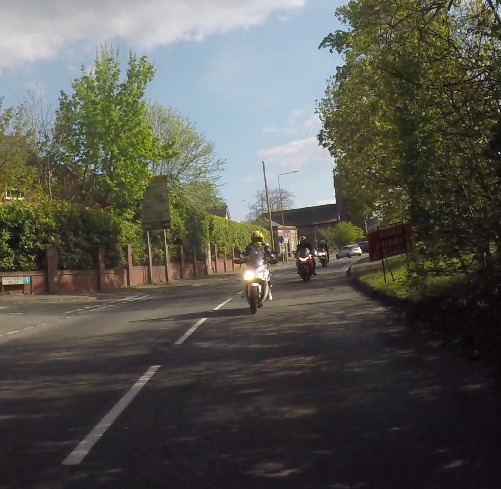 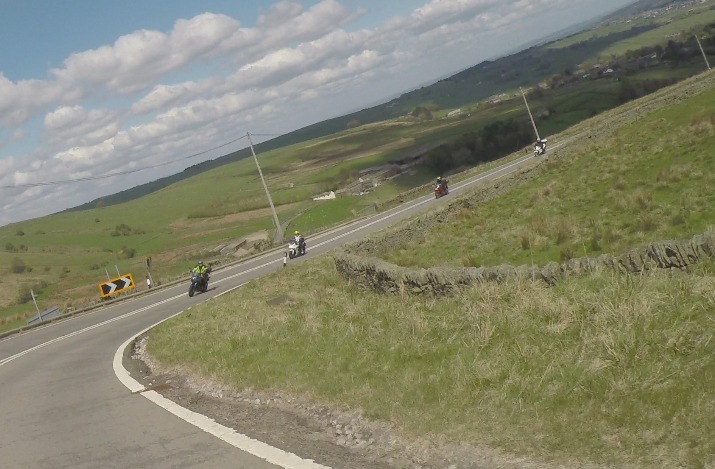 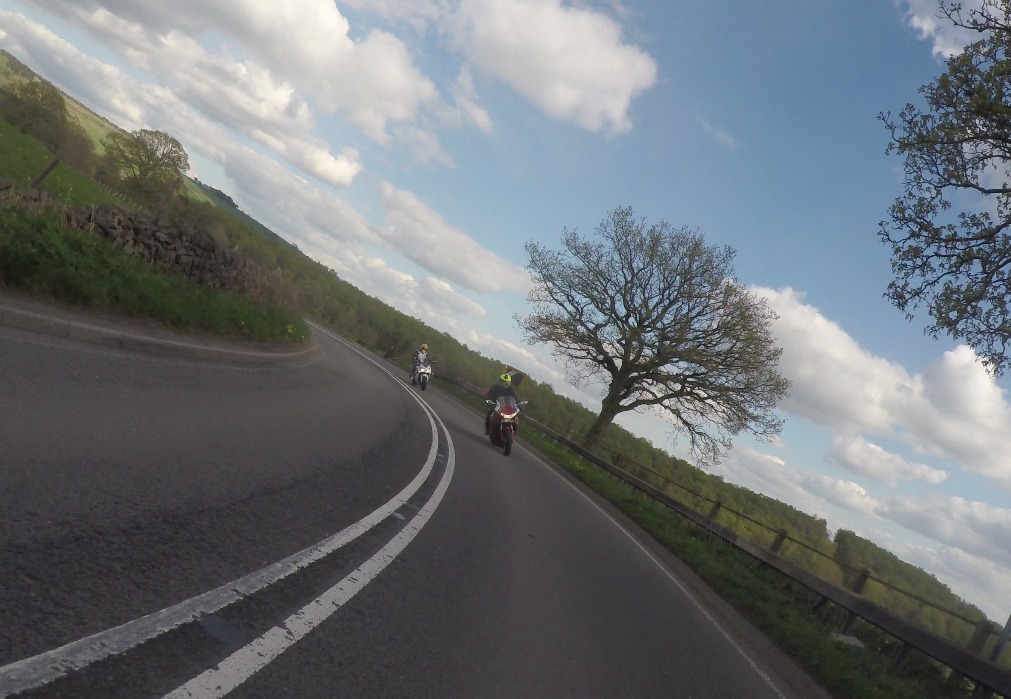 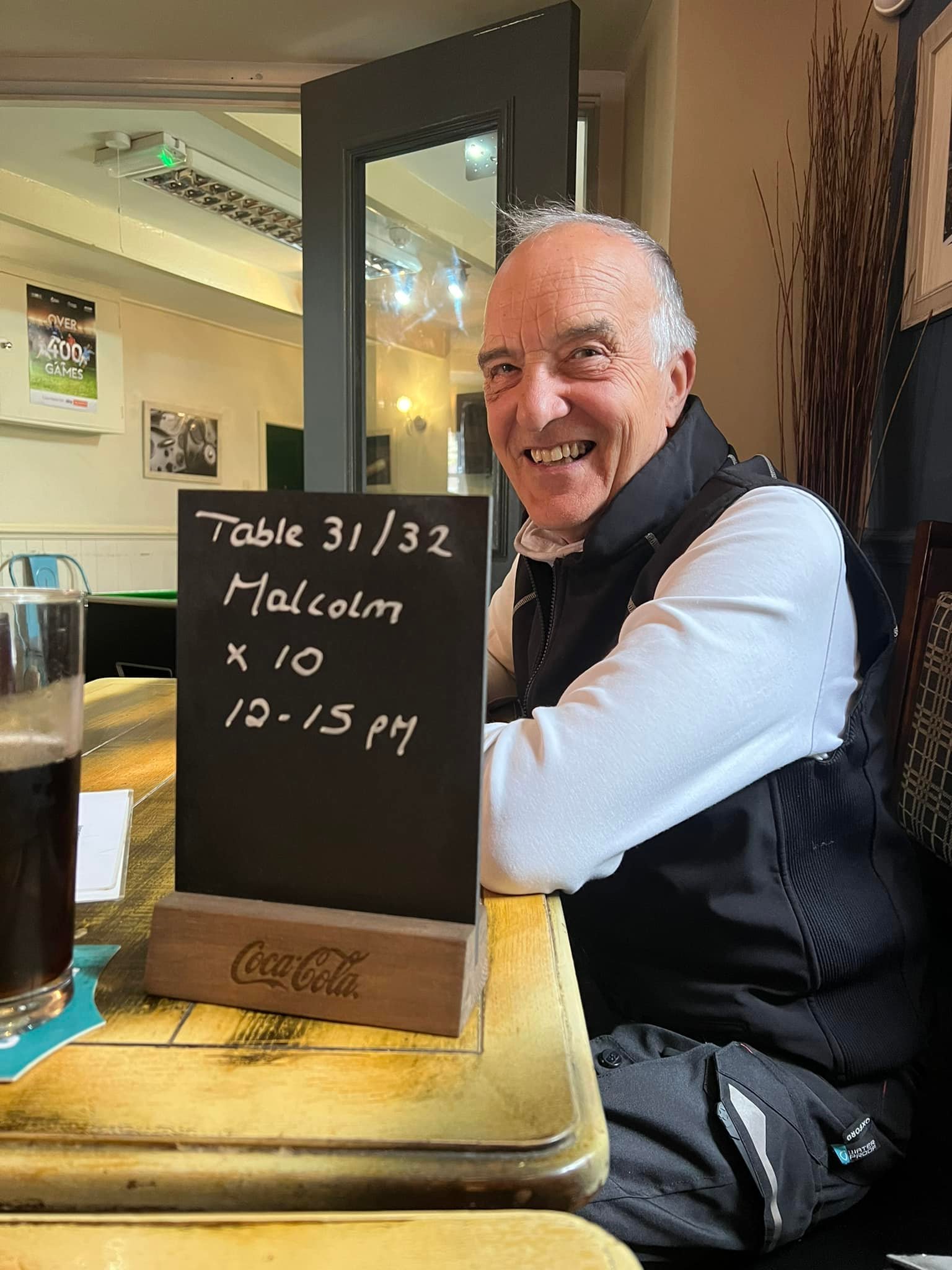 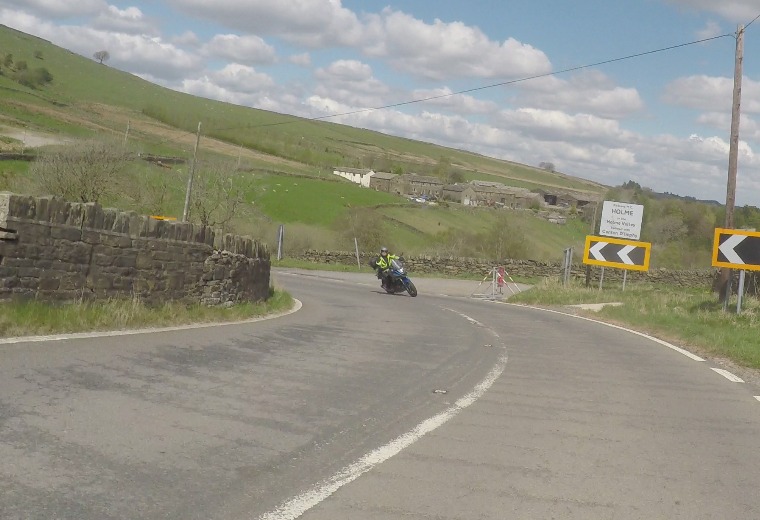 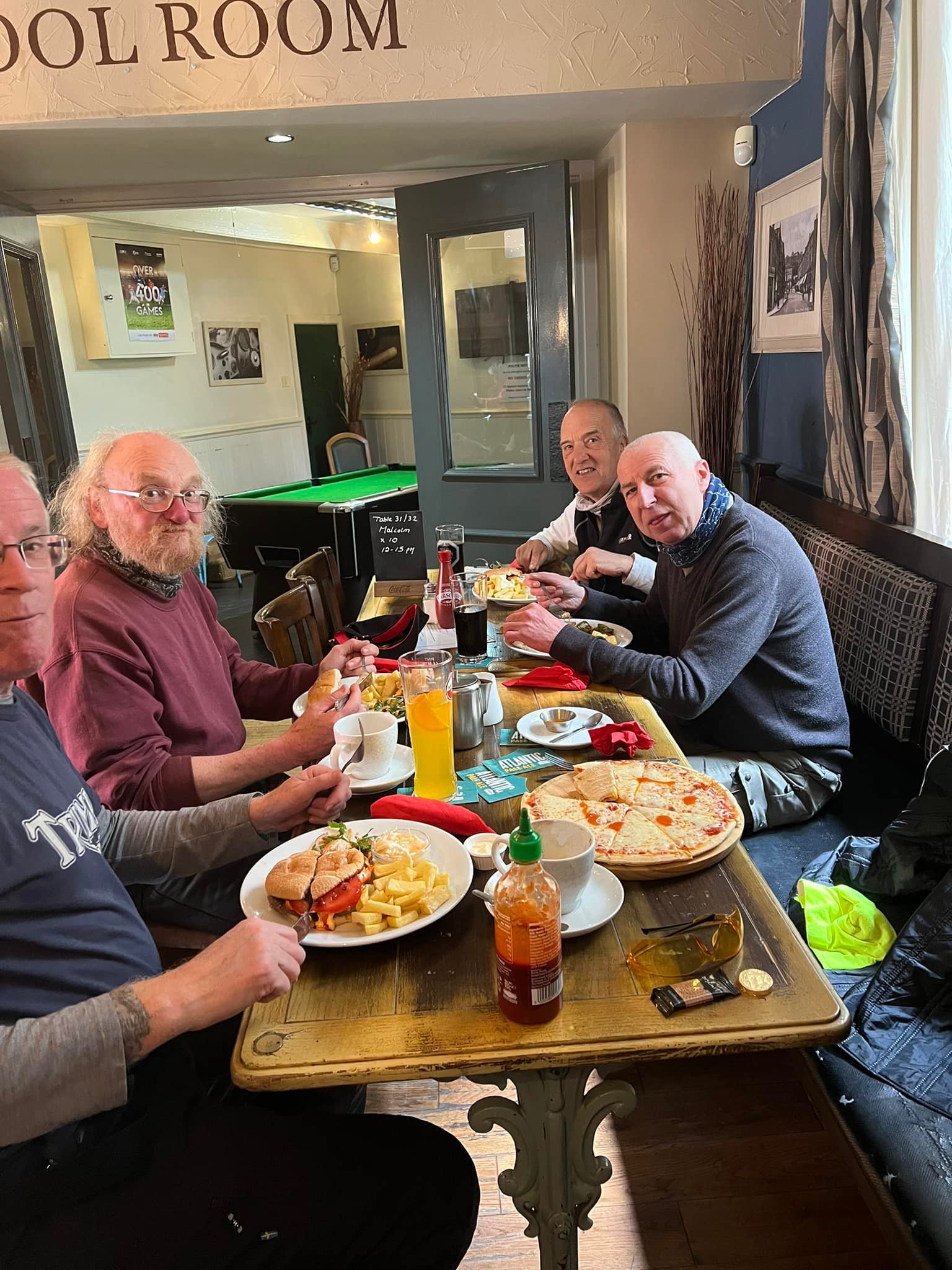 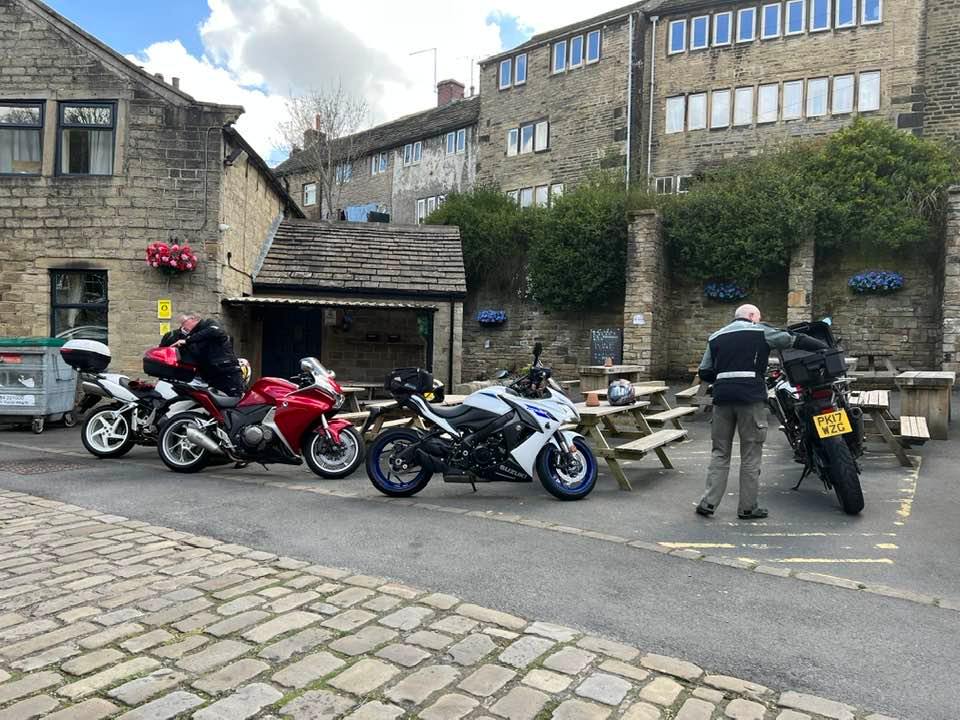 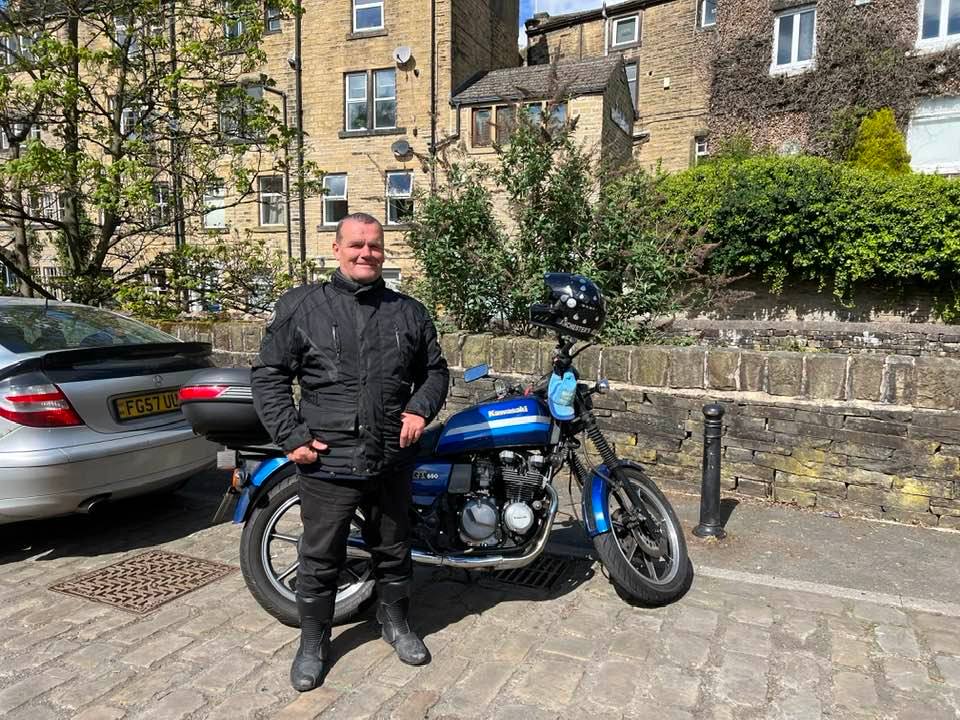 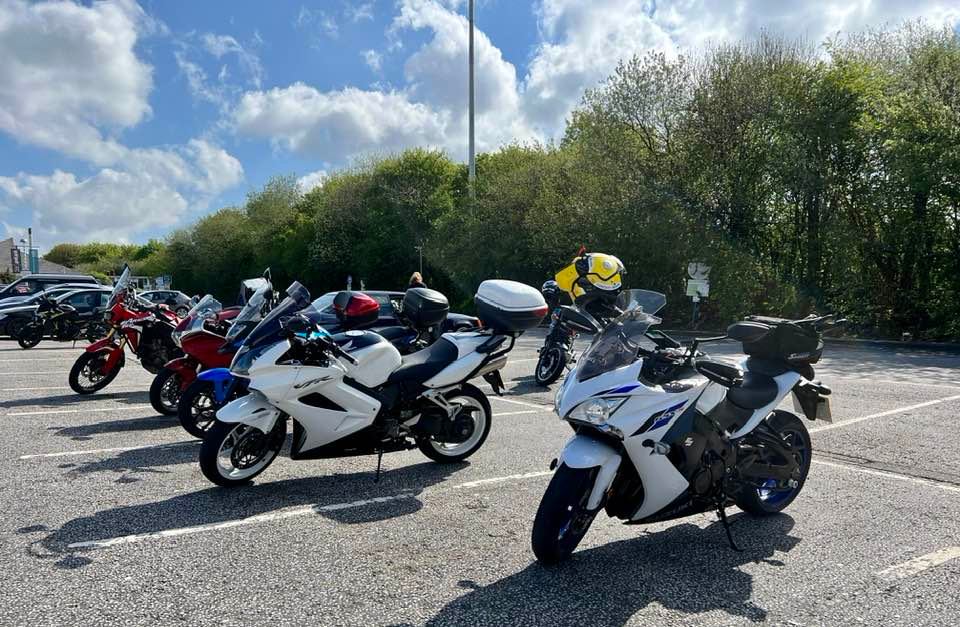 Mooch over the hills
What a good today was, set off in the direction of Chesterfield but nowt there so went to Matlock Bath, mega busy but the chippy in Cromford was fab, see Gary Fishers for more details.
After dinner we set off towards pops services via Sweatenham Arms pub for a coffee and a good Annalise of the days roads and riding.
6 bikes and a sunny day out
PERFECT.

A Grand Day out to the Woolpack (The New Inn)

The route there - A59 - was, basically fast flowing.  However, just after Gisburn  we endeavoured to pass another group of bikers. Confusion occurred, as they put in a left turn, bikes everywhere, but amazingly, we regrouped 10mins later and lost nobody!. However, they were not as lucky, for when we arrived at the New Inn, we had gained another rider - now 19+ bikes -  a very friendly guy with a very long beard tied with a red ribbon.

Following coffees, the group split and Barry and some of the others continued to the original Woodpack Pub, whist the majority stayed and we treated ourselves to a posh Sunday lunch.

The original route back was discarded and we were treated to a Garyvant. Our Shepheard led us over some of the best Yorkshire moor biking roads and fab scenery.  This started with the country roads to Knaresborough, then over the tops to Pateley Bridge and onto a final stop for coffee and cake at a pub just after Grassington.

Thanks to Gary and everyone for a great day. Happy days.

Fabulous ride today with the usual suspects and a couple not so usual 🤣  Bit chilly to start, then thawed nicely with a chilly blast to get you home that bit quicker. 15 Riders met at Maccy D’s Haslingden for a coffee and a bit of breakfast. Once fed and watered we headed off through Settle on into Hawes. Some of the group got food and others didn’t with the draw of the hot food van at Devils Bridge calling. Off we set only to be met with a sign being put in the food van of “sorry no hot food left” at this point I had a Madagascar moment where chairman Barry turned into a piece of steak and look good enough to eat. 🤣 cake and hot chocolate it was then. Gary did a great job of leading. The weather was perfect and the company was great as always.   thanks to Juels Kiki Suzuki for some additional pics x

And of course it could not end there, as our Shepherd would not go home and took Rich and Malc to Glasson Dock for final coffee and cakes. Fab day. 😀🙃😉

First ride of they year - and yes, I was going to do it. I set off when the temperature was 2.5c and the rain was on and off. Got onto the M62 and it was more on than off, but as I swept around Manchester onto the M6, it started to clear up and warm up to a balmy 5c.

I arrived at 10:05, to find I wasn't the first one there. Gary, Richard, Paul and Barry had all beaten me to it. We must be keen.

After a quick chat in the cold, we retired to McDonalds to await any stragglers. After a coffee orchocolate drink (and a bacon sarny for Richard), Malcolm arrived and proceeded to spill my drink all over the table. But a lovely serving wench soon got us all clean again and we prepared to set off.

By this time, the sky was blue and it looked lovely. So, we shot off down the A50 to Knutsford and Holmes Chapel before turning off over the motorway to Nantwich and all points West to the A49. Once here we shot down to the Raven cafe where we parked up. The Raven (it's called something else now) was full so we walked next door to another one (Midway?) where there were plenty of tables. 4 big breakfasts and some other food later and we were replete. Never mind, a blast back up the A49 would wake us up nicely. So that's what we did.

The A49 was its usual accommodating self - not too much traffic and plenty of overtaking opportunities. Which we took. Then, back to Poplar 2000 services where Richdard offered us all drinks and cake if we'd go to Costa rather than McDonalds. Well, an offer not to be refused. After a drink and a nice chat I left to head off home. Once there, I cleaned all the salt and mud off the bike, ready for the next jaunt.

A great start to the new year - I look forward to future rides.

The Route we took